Start:Stop - Trust in the slow work of God


Start:Stop at St Stephen Walbrook enables busy people to start their day by stopping to reflect. Ten minute reflections are repeated on the quarter hour, from 7.45am until 9.00am every Tuesday morning, beginning with a reading from scripture, followed by a reflection based on an event from this week in history, with space for silence and prayer. You can hear a recording of this week’s reflection at this link and read the script below.

Thank you for joining us for Start:Stop. This reflection will last under ten minutes and you are welcome to come and go as your schedule dictates. This week we consider two very different anniversaries. Often presented as pivotal moments in history that brought about an immediate transformation that changed the world, in both cases, beneath the bright lights and pizazz, we also find an alternative - but no less real - story. One of slow and steady progress towards lasting change.

Our bible reading is from St Paul’s letter to the Galatians, Chapter 1, verses 11-17.

For I want you to know, brothers and sisters, that the gospel that was proclaimed by me is not of human origin; for I did not receive it from a human source, nor was I taught it, but I received it through a revelation of Jesus Christ.

You have heard, no doubt, of my earlier life in Judaism. I was violently persecuting the church of God and was trying to destroy it. I advanced in Judaism beyond many among my people of the same age, for I was far more zealous for the traditions of my ancestors. But when God, who had set me apart before I was born and called me through his grace, was pleased to reveal his Son to me, so that I might proclaim him among the Gentiles, I did not confer with any human being, nor did I go up to Jerusalem to those who were already apostles before me, but I went away at once into Arabia, and afterwards I returned to Damascus.

This week in 1984 during the American Super Bowl, Apple unveiled its first personal computer to the world, in an advert filmed just up the road in Hyde Park. Rows of men dressed in grey were seen marching through a tunnel into a darkened room to sit in-front of a huge screen, where a computerised face barks orders. A female athlete bursts onto the scene in glorious technicolor and runs towards the camera. She stops and throws a sledgehammer, shattering the screen into smithereens. A deep voice declares: “On January 24, Apple Computer will introduce Macintosh and you’ll see why 1984 won’t be like 1984.”

The advert was a creative success - its director, Ridley Scott, went on to direct blockbuster movies.

The intuitive operating system of the Apple

Mac with its point and click graphics, revolutionised not only the personal computing industry but our relationship with technology - from the phones in our pocket to my washing machine, just about everything we use today  has a graphical interface. The new product forced IBM (represented by the menacing Orwellian computer in the advert) into some rapid product engineering of their own.

But, unlike the story portrayed on the small screen, the Apple Mac was not an immediate smash hit. Prohibitively expensive and with limited capabilities, the original model went through a number of iterations over several years. The technology we carry in our pocket is amazing - but it didn’t just appear overnight. As Jef Raskin, credited with inventing the Mac - and former Apple CEO Steve Jobs explained later - behind the bright lights and pizazz of Ridley Scott’s masterpiece there was another story. One of decades of painstaking progress by hard working engineers.

In the church, January 25th marks the Feast of the Conversion of St Paul - an event described three times in Acts of the Apostles. In the most familiar account, we learn how Paul encountered a blinding light followed by the sound of a voice from heaven that interrupted his journey to Damascus, where he planned to continue persecuting the followers of Jesus. Paul’s encounter with God is followed by his healing and baptism by Ananias and a vision of the risen Jesus himself, who commissions Paul as an Apostle to the Gentiles.

A “Road to Damascus experience” has since become shorthand for a radical and immediate about-turn in the way we live our lives.

But when Paul describes the event in his own words - as in the example we have heard earlier from his letter to the church in Galatia - his language is noticeably less “Hollywood”. He doesn’t use the word ‘conversion’ nor refer to the ‘road to Damascus.’ After his experience, he explains, he spoke to no-one.

Should we be concerned by the apparent discrepancy?

When I recall meeting people who have been through life-changing experiences - such as severe trauma or illness - often the way they describe the event seems extremely modest. They might explain its magnitude in terms of the lasting consequences - highlighting a greater appreciation of the smaller things in life; a change in attitude or perspective. It is when others tell their story that it is made to sound more dramatic! Perhaps this might help to explain the difference in the accounts of Paul’s conversion?

Paul’s experience did not turn him into a Christian over-night. He did not abandon his Jewish teaching and fundamental beliefs in God who created the world, in the teachings of the prophets, or the covenant God had made with his people. His encounter with the Risen Christ caused him to reassess his response to three important questions:

Who is Jesus Christ? and;

How does Jesus Christ transform who I am?

Questions, as his surviving letters reveal, that he continued to ask himself - and others - for the rest of his life.

So this week, as we celebrate the Conversion of Paul - and give thanks for the amazing transformations that have brought so much good to the world; let us also praise those slowly ascending the cliff faces of these profound step-changes. May we have the patience and courage to trust in the slow work of God as he transforms us at his own speed.

As we pray, the response to each petition in this short litany is “transform us, Lord.”

That we may accept the truth that everything that ‘has being’ wants ‘to become’.

That we may be truly thankful for the growth that brings such fruitfulness to the world and those who facilitate it.

That we may be granted patience and courage when the speed of progress is not as fast as we had hoped.

That in celebrating the pinnacle of our achievement we do not forget to give thanks for all that supports us below.

That we may have the strength to endure instability and uncertainty in the process of change.

That we may learn to accept that we are incomplete until our hearts rest in you.

That we may come to trust in the slow work of God.

The litany is inspired by a prayer of Pierre Teilhard de Chardin, SJ. 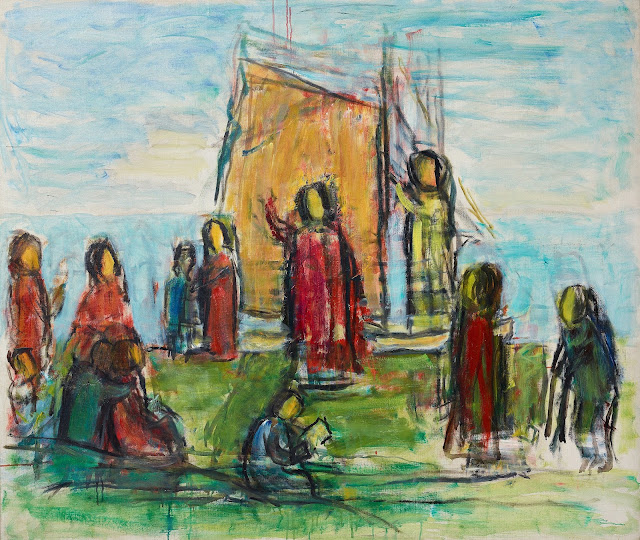 Phillip Dawson
Thank you for visiting this blog, where I post copies of prayers, sermons, book reviews and notes that I have made at lectures and events. Since 2018 I have been training to be a priest at St Augustine's College of Theology whilst working full time. I am a partner in a public relations firm and a property development company. I was a Director of a firm of architects for twenty years. My "home" church is St Stephen Walbrook in the City of London where I assist at weekday services. At weekends I regularly help out at St Stephen's Rochester Row, Westminster and St George's, Bloomsbury. I enjoy visiting other churches including St Michael Cornhill for Choral Evensong (Mondays from 6pm), All Hallow's for Taize (Weds 6pm), St Sepulchre's for Choral Services (Wednesday 1pm) and St Paul's Cathedral. From July 2nd 2023 I will serve as Curate at St Giles-in-the-Fields in central London. I have served as a Churchwarden at Christ Church Southgate, Board Member St Pancras and Origin Housing Associations and The Enfield Talking Newspaper. I have been Chair of Governors of a successful Primary School and a member of the Steering Group of HeartEdge